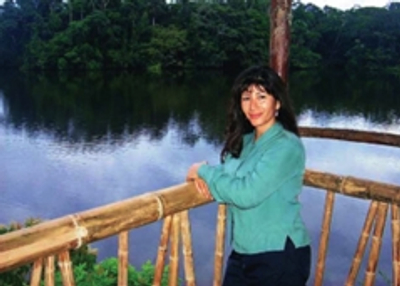 Together with indigenous peoples’ movements in Peru, Columbia, and Ecuador, Amazon Watch is effectively holding corporations and governments accountable for environmental and humans rights abuses. Atossa serves on the board of directors of Social and Environmental Entrepreneurs, on the Steering Committee of the Amazon Alliance, and on the Advisory Board of International Funders for Indigenous Peoples.

Atossa Soltani speaks and acts with authority in defense of all life in the Amazon basin, which she describes as the Heart of the Earth. If you want to get the scoop on the Amazon, refer to one of the many videos of interviews with Atossa available on www.AmazonWatch.org. There you will see a beautiful, poised and articulate woman describing the true value of tropical rainforests to the well-being of all life on the planet, and the shortsighted greed of those destroying the rainforests with single-minded purpose.

Tropical rainforests exist in a band around the equator. They are fragile and incredible biologically-diverse ecosystems that, once destroyed, cannot be recovered. (One acre of rainforest can support 300 tree species in it.) The Amazon basin is the largest area of tropical rainforest in the world—equal to the continental United States. The Amazon generates a full one-fifth of the world’s fresh water and oxygen, as well as being the source of one-fourth of the world’s pharmaceutical medicines. One-third of all animal and plant species in the world exist in the Amazon basin. Currently we have 100 species a day (world-wide) becoming extinct. That adds up to 300,000 per year.

So far, 20% of the Amazon rainforest has suffered deforestation (which means it is completely denuded of trees.) Another 22% is severely degraded. Severely degraded rainforest is in a process of drying out and dying. The tipping point of no return is 40%. We are perilously close to catastrophic damage that humankind cannot repair. At this point, every tree that is removed from the Amazon rainforest, and every road and dam that enters the pristine areas, brings us closer to the perilous edge of losing the Amazonia basin forever. We are talking about annihilation of the life support systems of the earth.

The Amazon basin used to be a carbon sink, but it has become a carbon emitter. Trees and soil contain carbon. When a tree is felled, or dries up and dies, the soil is exposed and the whole process releases carbon into the atmosphere. The disruption of natural cycles in the Amazon is contributing to global climate disruption. This creates what Systems Thinking calls a “positive feedback loop” in which the global climate disruption in turn exacerbates the drying and dying of rainforests. A 2% rise in global temperature would cause the die-back of 43% of the plant species in the Amazon. So far, we have a .8 percent rise in global temperature, which has caused the die-back of plant species to exceed the damages resulting from roads, oil drilling, cattle ranches, poachers, deforestation, slash and burn settlers, mono-agriculture plantations, industrial sprawl, and mega-dams in the Amazon Basin.

Atossa Soltani is at the heart of Amazon Watch, a courageous organization that supports the Indigenous peoples of the Amazon who are on the front lines of protecting the pristine areas of the Amazon rainforest from industrial development and all that comes with it. One Amazon tribe in the Peruvian highlands that is the headwaters of the Amazon, has kept oil company helicopters from landing seismic crews to conduct their explorations for oil, which they do by detonating dynamite. By doing so, they have avoided the spread of disease among their people, the spread of roads and pipelines, and devastating pollution that the big oil companies typically leave in their wake after grabbing all the oil they can find.

As Atossa points out, we can’t afford, from a carbon emissions standpoint, to burn the oil resources that are being found now. Nor can future generations afford the destruction of the world’s fragile rainforests in order to provide oil that costs more to produce—and to clean up the effects of its production—than the energy it yields. Many oil companies drilling in the Amazon basin use techniques for oil production that were outlawed in the United States in the 1920s. This includes dumping all production water (water polluted with oil) back into the rivers and streams. Huge areas of the Amazon have been thoroughly polluted in this manner, causing cancer epidemics in the Indigenous people of the region.

Atossa Soltani is involved in many progressive movements to solve the problems that Amazon Watch is working so valiantly to forestall. She speaks about a fundamental change in consciousness that is needed. She is at the clashing point where two opposite world views collide. One world view advocates the exploitation of world resources for the “good of man,” which sees all industrial development as the measuring stick of progress. The other world view recognizes that fragile ecologies do not support industrial development, but these ecologies are the warp and weft of the life support system of the planet.

We of Global Community Communications Alliance recognize Atossa Soltani as a change agent and an essential member of the global family taking positive action in the face of such dire circumstances, working towards tearing down and moving beyond the fallen system. Global Community Communications Alliance encourages everyone world-wide to cease being complicit members of a fallen system and join the SPIRITUALUTION™—Justice to the People.