Camp Beaches for the People 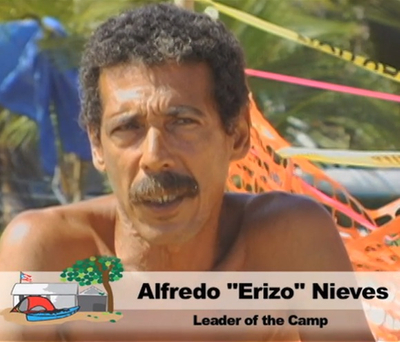 The story of Alfredo “Erizo” Nieves is told in the documentary “Companeros de Lucha ― Brothers In Arms,” which can be viewed online.

This is the inspiring story of activists in Isla Verde, Puerto Rico who have sustained a village of occupation since 2005 in order to save a stretch of public beach in the area from being illegally sold to private interests for yet another big hotel. It is the globally relevant story of people joining together to take a stand and protect a remnant of an important eco-system from the greed of the 1%.

The village is called “Campamento Playas Pa’l Pueblo ― Camp Beaches for the People.” Alfredo and his companeros took custody of 4.9 acres of land to prevent the Marriot Hotel from destroying the delicate natural shoreline eco-system after Marriot purchased a stretch of beach that has been legally protected as public common land for 80 years. A coalition of environmental lawyers called “The Neighbors of Isla Vista” are appealing a court decision to support what they consider to be a model of robbery to make public land available for private purchase and exploitation.

Once Alfredo Nieves (who is the leader of the camp) and others established the camp many alliances of support emerged to sustain their stand to protect the beach and this precious bit of natural shoreline. Among the coalition of groups are “Friends of the Sea” and “Coalition of Beaches for the People.” At first they were arrested and suffered many incidents of excessive force―but they kept returning. The supporting coalitions have utilized protests, street theater, music, and art to keep a strong presence that clearly expresses the will of the people in protecting the coastal shoreline from further degradation by the hotel industry. The village is sustained by donations while the residents spend their time becoming intimate with the nature of the place and developing an EcoVillage which includes a garden, rainwater harvesting, community meals, water storage, and other sustainable living practices.

By choosing to protect the land, they feel that the Spirit of the land is in turn protecting them. They are educating many to understand how important the natural shoreline eco-system is to the people of Puerto Rico. They are teaching that pollution from the hotels (which ring the Island) kills the coral that protects the shore from experiencing full damaging from hurricanes. They are learning about the turtles that require a certain temperature in the sand (not to mention undisturbed habitat) to breed. They are planting the natural grasses that help to maintain the natural shoreline ecosystem, and enjoying the manatees that swim nearby.

People all over the world are banding together to defend habitat and wildlife in their own neighborhoods from being totally destroyed. The occupied tent village has become the catalyst for a sub-culture in Puerto Rico that has gone way beyond the original purposes of the encampment.

We of Global Community Communications Alliance recognize Aldredo “Erizo” Nieves  as a change agent taking positive action against the privatization of public property, working towards tearing down and moving beyond the fallen system. Global Community Communications Alliance encourages everyone world-wide to cease being complicit members of a fallen system and join the SPIRITUALUTION™—Justice to the People.