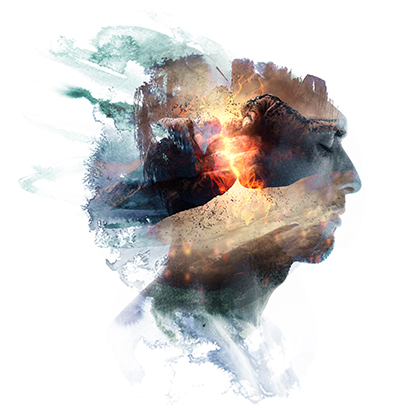 What I have come to realize is that anger is a very real human emotion that has two sides (like two sides to a coin)—one that is righteous and within divine pattern and one that is more based on pride, ego, the desire for control, selfish interests, and so on.

Most humans' anger is more self-oriented, with a desire to manipulate circumstances and people to fit their personal agendas. I think that kind of anger is a mental poison, as well as the anger that involves resentment (because we perceive that someone has hurt or betrayed us in some manner) and we have not yet forgiven them. Also, when someone's pride is challenged or ego bruised, poisonous anger rears its ugly head.

The smoldering, more generalized anger, often due to underpinning, unresolved personal issues and directed inappropriately at individuals or specific groups, is also a mental poison. I think for many people who have a more developed sense of right and wrong, generalized anger can be in part frustration at the evil in the world, in other individuals, and in oneself. That anger still can have the effect of a mental poison unless an individual learns to manage it by understanding it from a more spiritized perspective and channeling it into something positive and proactive.

Anger that is righteous at some level can actually save lives, give someone the impetus to bring about change for the better, and so on. Of course self-righteous anger (such as Ganid had towards the prostitutes who approached Jesus and him) is not righteous anger, because the individual carries a prideful, better-than-thou attitude. Ganid's self-righteous anger was less evil than the Jewish religious leaders' self-righteous anger, for Ganid did not have a deep-seated pride and was open to change and could easily be corrected by his Master and redirect his anger into something positive.1

With those particular self-righteous and blind Pharisees and Sadducees who wanted to maintain their false ecclesiastical power, etc., Jesus displayed righteous anger several times, even calling them names that clearly described their spiritual status. He used strong language in admonishing individuals and groups, including the general, mainstream Jewish population.2 And Jesus displayed righteous anger when he drove the commercial element out of the sacred temple, and though he was very patient and tolerant, Jesus at times expressed a degree of frustration, disappointment, and anger with his apostles when they continued to display lower traits, even stupidity and stubbornness.

So, I define righteous anger as anger that is directed at that which is out of divine pattern (evil) within self, within others, and within the systems of the world. In order for righteous anger not to be harmful and turn into a mental poison, it must be directed and channeled into action of some sort, and action is the goodness part of truth, beauty, and goodness.

I do think that those humans who can display righteous anger with the motive of benefitting others for change are few and far between, but they do exist. Jesus usually displayed anger in order to awaken others out of their spiritual “sleep state” and to give a lesson for all onlookers.

Interestingly, Jesus did give his followers some advice about anger on his second teaching tour.

. . . Anger is a mental manifestation which represents, in a general way, the measure of the failure of the spiritual nature to gain control of the combined intellectual and physical natures. Anger indicates your lack of tolerant brotherly [sisterly] love plus your lack of self-respect and self-control. Anger depletes the health, debases the mind, and handicaps the spirit teacher of man’s soul. . . Let your hearts be so dominated by love that your spirit guide will have little trouble in delivering you from the tendency to give vent to those outbursts of animal anger which are inconsistent with the status of divine sonship [daughtership].3

I think that Jesus gave this advice to the large group of “believers” because he realized that for them, anger would be a mental poison and not necessarily “good”—for them, or for anyone else for that matter. And it’s good advice for most of us humans to take seriously. We need to “manage” our anger, but more importantly, we need to see the true nature of our anger and address those deeper issues, which usually are beneath the surface of our cognitive consciousness. As we become more aware of the real cause of our anger, which usually will be more selfish and egotistical or from ignorance and fear or from unresolved painful experiences we have had, we can tap into the divine Spirit within us to help us bring that anger into our superconscious minds, where it will be transformed into something more useful for us and for the outworking of what God would have us do.

As I have grown more in my own inner life and in my relationship with God the Father/Mother, I have experienced a lessening of angry feelings. I find that much that used to really piss me off no longer does. My frustrations are less intense, though I still get frustrated with evil in general, and evil is anything out of divine pattern. So that means at times I can get frustrated with myself, as well as with others. But there’s a much lesser “charge” on that frustration; it’s more like a motivating force that has direction to do something positive, to take action.

I still rant and rave at the ridiculous stupidity and atrocities that happen all over the world, and especially at the injustices that cause so much human suffering and degradation to our planet, but the ranting and raving is not emotionally charged; it’s more mindal. And I think that God uses that transformed emotion (into a type of mental courage) to speak out with clarity and strength against wrong-doing, thus doing good.

So, in the war-torn areas of our personal lives as well as on a more universal scale, let’s turn our swords of anger into ploughshares of courageous activism, transforming war zones of destruction and destitution into gardens of goodness that feed and nourish individual souls and contribute to the true progress of humankind.

1 For further reading about Jesus’ and Ganid’s encounter with the “public women,” see in The URANTIA Book:  from Paper 133, Section 3. “At Corinth,” Paragraphs 6 through 10 [pages1472-1473 in the Urantia Foundation published version]

2 For further reading about a couple of Jesus’ encounters with the unfriendly religious leaders of his day, including his last encounter, see in The URANTIA Book:  from Paper 153, Section 2. “The Epochal Sermon,” which is in preparation for his talk with these religious leaders [pages 1709-1711] and Section 4. “Last Words in the Synagogue” [pages 1713-1715]. Also see from Paper 175 “The Last Temple Discourse,” the Introduction and Section 1 “The Discourse” [pages 19051908].