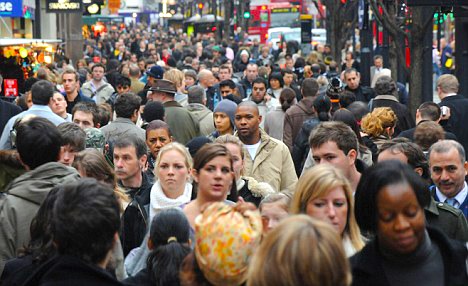 We should ask ourselves how many people should comfortably live in close proximity to one another, also in relationship to working and using the same recreation facilities. For instance, New York City has an approximate ten-mile radius (which includes the boroughs) with roughly twenty million inhabitants within that radius. In our extra-large cities of more than ten million people, how big should that radius be?

The answer to that is really difficult to figure out today because cities have suburbs and smaller towns surrounding it that create one continual urban area. Los Angeles, for example, extends north and south, so everywhere in southern California is crowded. You might say that all of southern California and north to Malibu is one big city.

Most eastern cities are the same way—Chicago, Washington, D.C., Philadelphia, Boston, Pittsburgh, and many more—all extending well beyond the specified city boundaries, and you have to drive at least 50–100 miles from downtown to get out to any rural areas. When people on city sidewalks look like ants in an ant colony—bumping into each other and crawling over each other—shouldn’t you begin to realize something is wrong? When traffic jams are backed up for miles and miles, and sometimes for hours at a time, shouldn’t you begin to ask if this kind of lifestyle is healthy for you or your family? Is it worth the money you are making?

Stress is one of the major reasons that people die of various heart problems, loss of vital organs, and other major medical situations. It is not just the stress from work-related problems that kills you. It is living and working in an environment where stress cannot be alleviated properly. For example, working in an overcrowded office in a high-rise, or even if you are working in a high-rise in your own private luxury office, it is still a high rise, but the pollution rises right up to meet your stress. So do not open a window!

And when you go down to the first floor and go outside and walk out on the street, do not inhale there either, because it is not clean air you are breathing, it is the toxins from thousands of automobiles and other industrial pollutants in the air that kill you just as invisibly but yet as literally as someone coming up to you and putting a gun to your head and pulling the trigger.

People are told by the American Medical Association that they are living longer today. Most people today, even if they live to be in their sixties, seventies, eighties and even nineties, actually have tired and unhealthy bodies, and often the poor health begins in their forties and early fifties.

I am amazed to hear sports broadcasters referring to boxers and other athletes as being “over the hill” when in their thirties. I think that much of their fast aging is because these athletes are living in urban areas, not so much because the sport is doing it to them. Those athletes who do not live in urban areas are usually healthier. Those boxers and other athletes who train in urban areas should find that their energy levels are lower than those who train in rural areas who can last into the later rounds with more energy and power.

Everything in urban life is meant to stimulate the senses and mind but not the soul. It is the soul that actually houses the mind, and the physical body temporarily houses the soul. When the physical body begins to break down, the soul will suffer too, unless one feeds the soul the way it is supposed to be fed: with nature, clean water, organic food, the camaraderie of living with significant others, and of course treating other people kindly and taking time for them, which is something that city life does not promote in its “hurry up” atmosphere.

In a large city people often are lonely, even though the population of the city they are living in can be millions of people. However it is not just living in smaller cities that leads to prolonged life and better health and healthier aging. It is living in true community, where a communal aspect of life feeds the soul—that is having as many material things in common with others as possible and sharing those things, sharing living spaces while having adequate privacy (as opposed to two people living in a 6,000 or 7,000 sq. ft. home), sharing automobiles, and passing clothing down to others. Most of all, instead of living in overcrowded urban neighborhoods (even if you live in a cul-de-sac and think that is more privacy), true community is the joining with five, ten, twenty, or thirty people to buy some land in the countryside with adequate acreage for the number of people, where you can see some open spaces and trees and horses, instead of stray dogs and cats, and (unfortunately for many poor in this country) living with rats.

Perhaps you may say to yourself now, “Where can I find these other people to put my limited finances with to buy land in rural America?” Perhaps you may not have any finances at all, but you have talents to offer that contribute to building the infrastructure of the community and maintaining its upkeep. Perhaps you have computer skills, or gardening experience, or cooking abilities, or a knack for caring for children. Whatever it is that is practical, those are valuable assets.

You are never going to find those people to build community with unless you take the steps to find them. It may be as simple as talking to strangers, going to coffee houses, putting ads in the paper if you can, making flyers, using bulletin boards, even looking to see what communities have already been formed that you can join. The Internet is a good source. There is also a magazine called Communities that lists intentional communities across the United States.

With the onslaught of modern civilization and industrialization, the once-tribal communities—that understood the value of living and working and playing with other human beings, called neighbors—are no longer part of living, real living. Now people move to cities to find work. But what good is work and making money if it takes up all your time getting to and from the job and then when you come home you are too tired to interact with your family? And you do the same thing every day and long for the weekend that is no longer really restful. Unless you get out into the rural areas, that weekend is usually a loss too for finding reprieve from stress. That is why most people try to get away on the weekends. Instinctually people know they want to go somewhere where they can breathe more deeply and slowly, be near water or in the mountains or in the open spaces, smelling the flowers (instead of the garbage).

You would be surprised how much money you do not need once you live in true community life and what ten, twenty, thirty, forty, or fifty committed people can accomplish when working together for a common purpose. You can live in beautiful environments that you would never be able to afford if you would try to buy that kind of living environment on your own.

Urban life and being independent of others is the kind of thinking that has caused the isolation and loneliness of people in Western civilization. People have become more selfish, and the idea of being your brother’s and sister’s keeper does not even come into the modern mind. You should be able to help raise the children of other extended families in real practical ways and be a part of those children’s raising, not just your own children of your immediate family.

This can be done in a communal living situation where it cannot be done in the isolation of box houses in a suburban neighborhood where you hardly ever see your neighbors or their children and you may think you should have nothing to do with the raising of these children. There is an ancient saying, “It takes a whole tribe to raise a child.”

Living with animals is the way of nature between animals and humans. This too has been lost in urban life. Animals are kept in cages in the cities called zoos. (Actually the zoos are where some people should be living, for they are the real “animals” when it comes to consciousness.) People in urban life may get their children a dog or a cat, but in rural life, living on a farm, they can also play with chickens, goats, cattle, pigs, emus, rabbits, and horses. Children come to know more about these animals when they live near them on the same land.

Many of these children do decide to become vegetarians because they grew up with these animals and know that they have a life too, that they have babies and care for their young. To urban children, the chicken or beef or pork are bought at the local supermarket without any consciousness that they were once living and breathing creatures of God. I am not saying that everyone should be a vegetarian, although I do think that a higher consciousness of animal life is needed by meat eaters, particularly those who eat beef, pork, and chicken.

Unfortunately there are people who do not want community and move to the country, build the same kind of toxic homes, live in close proximity to each other but have no neighborly contact, and in time another suburban environment develops in the once-pristine countryside.

Unfortunately there are contractors who even claim to “build green,” when the only thing green about their building projects is the paint on the walls. Developers take a pristine country setting and build condos or timeshares, and people buy them as second homes. And many of these large developments, with hundreds of clone-like homes, have names that imply peaceful, country living that is not the case at all; they are extensions of the city.

There is no substitute for true country living and true community life, no matter how you try to market the decoy. I recently passed through a golf resort area (another tragedy of modern times) with a development that was called “The Mission.” They had other names, for streets, like “Chapel Way,” “Meditation Way”—you get the idea. It sounded so good that Jesus Himself would buy a condo!

Many counties in the United States need to have stronger laws against these kinds of irresponsible and non-sustainable developments, particularly counties in the rural areas that are still left, or these counties will become one big city instead of a rural county with open space, and the countrysides across America will be lost to greedy developers and unconscious buyers of these modern toxic homes and anti-community developments.