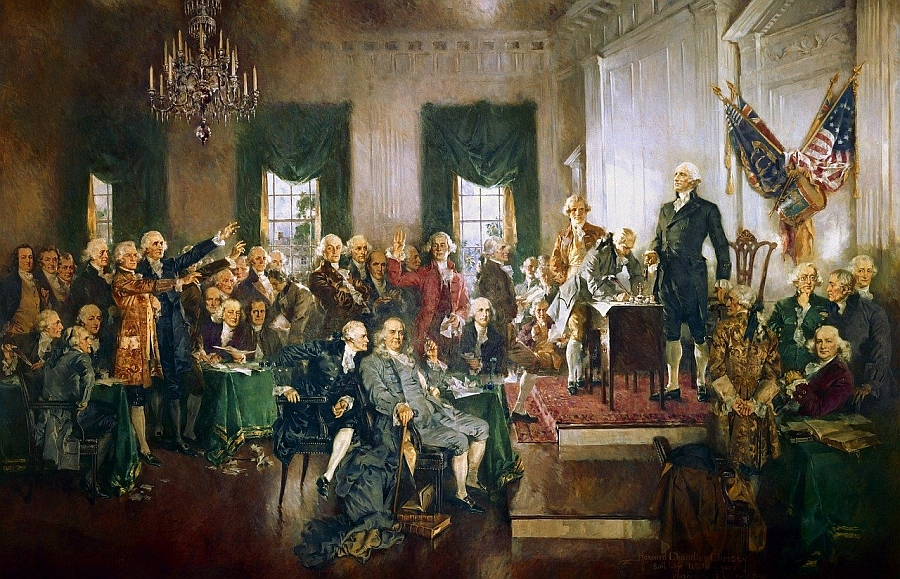 “One Nation Under God.” Are we? Our Constitution was written by men of God, bound together by the sufferings of their forefathers in Europe over the abuse of authority by so-called “men and women of God,” who ruled with self-righteousness, just like the Pharisees did during the times of Jesus—remembering that it was the so-called men of God (the Pharisees) who actually put Jesus on the cross.

The Civil War that occurred from 1861 through 1865 was fought with brother against brother, friend against friend, and, in some cases, fathers against sons—a horrible war that only happened because men of God on both sides forgot to live up to one of the Commandments of “Thou shalt not kill.”

Civil wars are the worst kind of wars. It’s not like you are fighting an enemy that is trying to take over your country from the outside, but in a civil war it’s an attempt to take over one’s country from the inside—a battle of consciousness against consciousness. The Constitution was written so this kind of thing should not happen. The writers were aware of the many revolutions in Europe and knew full well how terrible civil wars are.

When it boils down to it, can a person—who thinks they know God at any level—kill another brother in the name of God or in the name of “right”? The answer is always no within divine law, and those who do such things will be judged by the very God they think they know.

The American Revolution was not a civil war. It was a war against England’s over-taxation and oppression of the American colonists. However, the Civil War in America was a war that involved fighting against those in one’s own family who had different political and spiritual ideas.

How anyone can think that slavery is right before God’s eyes is the same reason today of how anyone could think a black man could not be President or a black woman President, for in God’s eyes, He does not see colors; He sees the soul. And we who follow that same God should see only the soul too.

If individuals truly know the “God of Abraham, Isaac, and Jacob,” and “the Son of God” who came to this earth as Jesus Christ (as they claim they do), they would not be thinking about killing their brother, and they would accept the will of the people, even if it was one vote that would make the majority—let alone 7 million votes more for the victor—because that is the way the founders of our country wrote the Constitution. This is democracy.

My prayer is that those individuals who voted for the loser of this election and who know God, at their level of understanding, come to their spiritual senses and realize that they should never shoot another American, nor anybody else who thought differently than them in any way, for “America is the land of the free and the home of the brave”—ideally brave in righteousness and godliness.

We Americans, who become true spiritual adults, try to obey the Commandments of God—despite the immorality of the values reflected in our films, television, radio, and magazines. If we who claim to be “spiritual” don’t do that, we must seriously question our relationship with God, whether we even really have one. We must realize that there can be no order in our civilization without laws of morality and ethics, like the Commandments, which are part of three major world religions.

I have greater hope in Americans, that we truly are “one union, under God, indivisible, with liberty and justice for all.” That is what our soldiers died for in the First and Second World Wars, to uphold the Constitution of the United States against its enemies (foreign and domestic) who go against those Commandments, as well as protect the threatened democracy of other countries.

Like the ancient Israelites of old—who believed in the God of Abraham, Isaac, and Jacob—those who know that Jesus came for all humanity to teach us the Fatherhood of God and the brother- and sisterhood of humankind, for 2,000 years those true believers have set the standard of right and wrong, not only in America but on the whole planet.

We Americans can still set that standard as we bind together, through our differences, to uphold the Constitution of the United States and the truth, as taught and understood by all who follow the teachings of Jesus Christ, despite our differences, knowing that He is the Prince of Peace, not the prince of war.