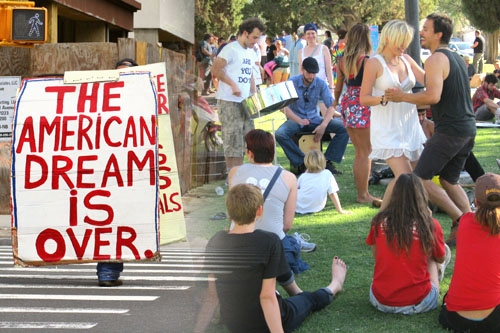 On Saturday my wife and I were driving to the Occupy movement in Tucson that was going to march to the Bank of America to protest. My son and two daughters were there already, as well as several others from our intentional community. We drove past the University of Arizona stadium where the Wildcats football team was playing that day. We saw hundreds of college students walking with six-packs in their hands. As we drove by the university stadium parking lot, we saw thousands of students with kegs of beer and booths, all getting drunk and boisterous.

I thought this looked more like Sodom and Gomorrah than a university parking lot, even if there was a football game going on. But the main thought I had was these college students should be going to the Occupy Bank of America march. When we got to the march, there were only about one hundred people, but there were thousands of people at the university parking lot drinking beer.

I thought back to the first day of Occupy Tucson at Armory Park when we went there a few weeks before. While we were there, we saw several hundred university students marching in, chanting, “We are the 99%.” They marched through the park and basically out the other side, returning to the university and their usual hangouts. I do not know if any of them talked to anyone at the Occupy Tucson event, and I doubt if any of them put up a tent in Armory Park and stayed there to occupy it. Many of these students probably were the same students drinking beer in the university stadium parking lot.

I realized that these students still have The Great American Dream. They have not yet graduated from college and tried to get jobs in their career choices. They are still being mostly supported by their parents—the same parents that I wrote about in another article who need to unoccupy their couches and go on strike themselves from jobs and careers that do not serve humanity. Although these students who marched in Tucson said that they “are the 99%”—(and in fact they will be, if they ever graduate, because it all may come down like Humpty Dumpty sooner than they think)—they are really part of the 1% in their consciousness, because the majority of them are part of an educational system owned and operated by the powers-that-be who feed the students the power-elite’s doctrines of greed and prosperity.

Although these students are aware that graduates who went before them have huge loans they cannot pay off because they cannot find work, these current students think that by the time they graduate everything is going to be honkey-dory. So with their parents’ money, they can still buy all of the gadgets, drink all the beer, and go to all the bars that sell them the false message of “the good life,” of The Great American Dream, that they might never realize. That Great American Dream was opportune for periods up until the 1960s.

In the beginning of our nation, immigrants were welcome, and they came from all over the world to try to build a better life, earn a decent wage to support their families, and maybe even buy a home instead of renting one. That opportunity to earn a decent wage has been gone for decades now for still too many, and it is getting worse. And gone too is the welcoming of immigrants who want to improve their lives in this country.

Most students today have a different Great American Dream. The idea of “prosperity” for the beginning immigrants—even up until the 1920s and 1930s in this country—was a lot more humble. To them, earning enough wages to feed and house their children, and maybe even send them to college, was the Great American Dream. Today, in the twenty-first century, these university students think they can be another Steve Jobs and Bill Gates and Joe Firmage. What they do not realize is those days are over for most, and the millions of poor and disenfranchised marching on the streets now—the working class, even the unions—are tired of being held captive in their dreams and ambitions and even in the ability to take care of their own families, who are now losing their homes, and many even having to live on the streets.

There have been revolutions of the people against the elite for centuries, in France and in Russia and in China and in Spain. But no system was really found to be put in the place of capitalism. So revolutionaries modified capitalism or did away with it completely and adopted communism, which was never going to work because they left out the Creator.

Jesus was a working man, a carpenter. He taught true communism, which is actually communal living and sharing, based upon being guided and protected by true spiritual leaders, who were then called apostles and disciples. This meant that these guides had a relationship with the Creator. There is a line in the book of Acts that says the followers of Jesus all went house to house and broke bread together and had all things in common. This one line, if truly followed, would be the answer to most of the problems in the world, for it says in the beginning of the Old Testament in the book of Genesis, “Be thy brothers’ and sisters’ keeper.”

The philosophy of many Republicans and those in the Tea Party movement is just the opposite of what Jesus taught (even though some may call themselves “Christians”). They teach instead the ideology of rugged individualism, which includes: the idea that “You can pull yourself up by your own bootstraps,” and the Protestant work ethic of touting that everybody who really tries can succeed and be financially prosperous and those who are not prosperous are lazy and deficient in some way. These teachings of self-reliance worked only for short periods in the beginning of American history because there has always been a gap between the rich and the poor due to many factors that include prejudice, unfairness, and greedy manipulation of circumstances and laws.

Today the gap is 1% rich and many of the 99% unable to even get a job or are on a job where their wage will never increase to really be equal to meet their own dreams of having a better car or even a boat or traveling or buying better clothes. No, they have settled for mediocrity. In their 9-to-5 jobs, many are miserable. They do the same routine everyday—come home from work, become couch potatoes, and listen to Big Brother tell them what to buy, what drugs to take (because whether they know it or not they are sick), and other propaganda to keep them happy slaves—a self-delusional existence all perpetrated by the 1% who control the masses.

The police and even the military are the slaves and the puppets of the power-elite. They have believed the lies fed them, and so they have settled for much less than what their God-given destinies could be had they become really in touch themselves and developed a real relationship with the Creator instead of the gods of propaganda in the television shows, movies, and radio programs they are mesmerized by.

Many of those soldiers who have been in the wars and somehow survived and come home to America know they were used by someone, and they come to learn that it is their own government. Many of them have even come to understand that the government is controlled by the 1% power-elite. A lot of soldiers enlist in the military and re-enlist because they have no future in the present economy, and that is just the way the power-elite wants it.

The more individuals have to depend upon the system of greed and avarice for their basic needs and to obtain some of their wants, the more they become slaves to those who will control them for the rest of their lives. Many have to sign their life away to obtain those things by loans and credit.

Even though the elite often use the words “democracy” and “freedom” in justifying their positions of unethical power and abuse, too many of the people really live in bondage and hopelessness to ever achieve their real dreams, which most shove to the back of their minds and hearts.

You do not have to be a multi-millionaire to be in the 1%. If your consciousness is that of greed and avarice, you are of the 1%. It is a consciousness too. That is why I coined the phrase “SpiritualutionSM—a spiritual revolution,” a revolution of consciousness. A personal relationship with the Creator is the only thing that can bring true justice to the people and true freedom.

If a Spiritualution consciousness shift happens on a global basis, the planet can come into the first stage of light and life, which is also called a global Divine Administration. The people of the world need to come into the divine mind, the divine mind of unity and cooperation, and care for one another. People need to grow community gardens together. People need to stop being mere consumers and live in earth harmony with all of the Creator’s creation—human, animal, plant, and mineral.

If this does not happen now on a massive scale, if people all over the world do not replace the governments of totalitarian rule and dictatorship and imperialism and capitalism with a Divine Administration of true godly leaders, our earth and the people on it will perish, for we have come to the depletion of our natural resources. No man or woman has the answer, only the Creator does, and all people have to be guided by the Creator and not by the doctrines of religions or the voices of propaganda perpetrated by the power-elite in all media.

True Godly leaders do exist, but you will not see or hear them on television right now or in the movies or on the radio, for these are all controlled by the power-elite, by the gods of greed. But you can look for these true Godly leaders, because they are out there, all over the world, humble men and women who have a true concern for the welfare of not only their immediate families but for the people and children of the earth. It is these leaders you must follow—not the voices of power, wealth, and fame, but the voices of caring for one another, the true mothers of the world who nourish and comfort and the true fathers of the world who protect and guide.

You do not need a degree, certificate, or wealth to be successful and survive in this world. You need to learn to use your talents to serve others. In this manner the Creator will give you back everything you need and a hundred times more.