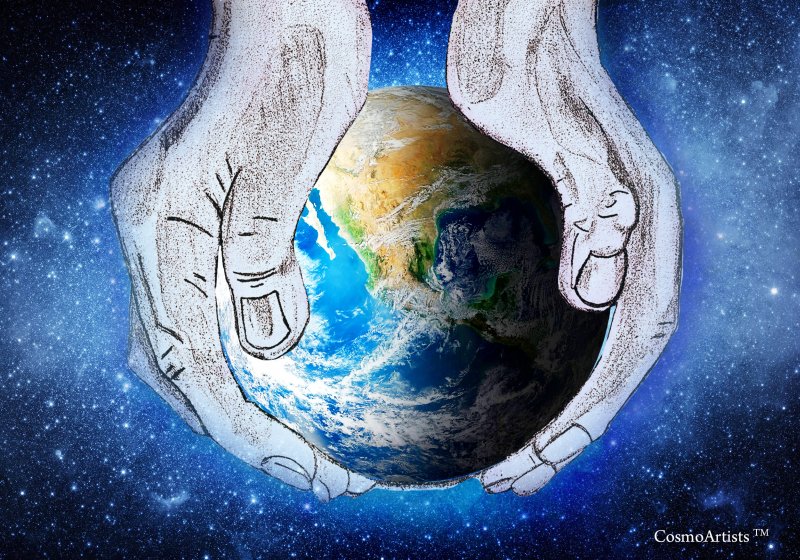 Well, here we are in August of 2020. The summer is half over, and our lives definitely seem to be moving faster towards some kind of inevitable end. The whole world we know seems to be dissolving, and many of us are sensing something accelerating in our lives, like we are being pulled in a direction we have no control over.

We all realize that someday we will die, for that is the fate of living things on this world. There are many ways in which we can meet death at this time on the planet: the Covid-19 (or the next one that mutates), earthquakes, fires, hurricanes, floods, tornadoes, and countless other so-called natural disasters, which may not be so natural in these turbulent times. And even more frightening is the threat of a world war of nuclear proportions.

Some of our children, who we raised in the ways of the truth, have left us to follow their own lusts and selfish desires, because this seems to be the way of the world.

Some people in certain religions seem to be so quick to judge people of other religions, as to their salvation. For example, most fundamentalist Christians don’t even think Muhammad Ali was “saved,” and thus he “went to hell.”

And he did go through hell when trying to get people to call him by the name he chose to reflect his spiritual awakening—“Muhammad Ali.” Many small-minded people wanted to continue calling him Cassius Clay, attempting to keep him small too, because they weren’t willing to make the evolution in consciousness that Muhammad Ali did in his early life. Anyone who is not prejudiced and does a study on Muhammad Ali would come to a determination that he was a good man who did good things for people.

There are a lot of true change agents in the world, who don’t stay small but expand their consciousness and become what God wants them to become. Those everyday persons might not become as well-known and popular as Muhammad Ali, but many of them should ideally be recognized by others.

It’s strange on this planet that we base our heroes on sports figures and not on teachers or spiritual leaders. As a matter of fact, spiritual leaders—who try to rock the boat with revelatory spiritual revelation—are usually persecuted and so are their followers, like Joseph Smith and the Mormons who followed him.

Bahá'u'lláh of the Bahá’í’s, spent years in prison living with vermin crawling all over him, simply because he basically taught that we are all one. All of the great adepts and sages, since the beginning of time, have said the same thing. And the fundamentalists of their eras burned them at the stake, cut them in half, because other men are not big enough to love their fellow man, like the first commandment states: “Love your neighbor as yourself.” But we don’t love our neighbor as ourselves, unless they speak our same doctrines, written by narrow-minded men.

Small men, with little minds, try to make themselves popular on the coattails of great men and women, by demonizing them in any way they can. This is not what our forefathers had in mind when they talked about First-Amendment rights. Yet Facebook and other social media allow these smaller-minded people to say anything they want about these great leaders, in the name of “free speech.”

Individuals like Mark Zuckerberg become billionaires, allowing the demonization of true spiritual and political leaders, and even the demoralization of decent common Facebook users. Facebook and other social media have become online tabloids of cheap gossip and character assassination. Young people have even committed suicide because of the demonization of them by other twisted and mentally sick young people, who have no values or sense of right and wrong. There definitely needs to be a higher standard set for Facebook and other social media, with regulation implemented if necessary.

Isn’t it strange that now you can’t go out and enjoy other human beings? You can’t hug them, or shake their hands, or sit close to them, because of the Covid-19. But maybe it’s actually because of our own judgments towards one another, and those judgments have turned into viruses. “Oh, that’s not ‘science’.”

However, it is science. It’s called ascension science and the physics of rebellion. It’s a long story now, because for the last 200,000 years, since the Lucifer Rebellion, humankind has decided to do things their own way and not God’s way. And they have thrown away the commandments of God for Hollywood and Wall Street theology.

So people in California, particularly on the beaches, want to have fun in the sun. You’re not going to stop them from going to the beaches or get them to start wearing masks. Those young people (and sometimes not so young) think they’re invincible.

Hollywood continues to put out movies with teenagers being sexually promiscuous and becoming drunk or high on alcohol and drugs. The message is that it’s what everybody’s doing, and it probably is for a large percentage of youth, even if their parents or grandparents raised them differently. All too often, if there is a parent or grandparent who speaks up, the children or grandchildren shun them, because they don’t want to hear the voice of God speaking through their father, mother, grandfather, or grandmother.

What did Saint Francis mean when he said he was an instrument of God? He meant when he spoke God’s truth, he was speaking for God, and that the truth that he spoke was the truth of God, and that God does exist, and that God has laws. If you obey them, you live a more peaceful life and all the things you desire will be given to you in God’s time. What a revolutionary teaching. That’s why Francis was called the Morning Star of the Renaissance.

Jesus said that He did not come to change the law of the prophets. He did not come to change the law of Moses, who received the commandments from God at Mount Sinai. No, Jesus said He came to fulfill the law. Jesus confronted the wrongdoing He saw; He called out error and sin. How can anyone read a truly holy book and not obey the Creator’s laws of the book? Jesus called the particular religious leaders who were not holy hypocrites. They crucified Jesus, not because He wanted to take over their positions, but because He spoke the truth. He held people to the laws of Moses.

There are plenty of self-proclaimed spiritual leaders who make up their own laws and gain thousands of followers, because they teach free sex and do what you want to do, like Osho’s Sannyasins and Aleister Crowley’s religion Thelema. There are plenty of New Age gurus reinventing the wheel of moral divine law, and they really sound great, because sin can make you temporarily happy. It appeases your flesh, your lust, but it cannot make you blessed, which is “Asher” in Hebrew. Being blessed is experiencing a wholeness within self. Being blessed is feeling sanctified within the universal laws and pattern of God.

When you are blessed, it is God who gives to you, and you don’t have to do anything but be pure. And when God decides you’re ready for a blessing—like the real complement wife or husband, and children, and all the things you need in life to survive and meet your destiny—it’s God doing it for you. It’s magnificently, divinely supernatural.

But if you don’t know what it is I’m talking about, God forbid, you’ve lost your way. All of those adepts talked about the Way, the Tao. This was Lao-Tse’s message, to stay on the Tao, to receive the blessings from the Creator.

The true laws of God are already written in your soul, in your superconscious mind. Everyone knows right from wrong. And those who choose wrong are looking for teachers to fit their rebellious ways.

When ancient Israel obeyed the laws of God, they prospered. When they started listening to the Hollywood of their time, they were destroyed by invading armies that dispersed their people all over the world, particularly in Europe and England, and eventually the United States.

But there’s nowhere you can go on Earth, or the grand universe, to escape those laws. They are interuniversal laws. Only on this world can a Creator Son of a planet be crucified by the very sons and daughters He created.

Yep, religions can really screw you up, trying to figure it all out, and everybody has an answer. But the answers are really inside us, if we pay attention to the written tablets in our hearts.

Trust in God is a big element. And basically individuals today do not have that trust anymore. Children are not taught to trust God. They are taught to trust the system. And the system tries very hard to keep you in it, by charging exorbitant college tuitions, so that you have to take out a loan to pay for them and be trapped in that system all your life. And once you get a credit card, which is the normal way to pay off bills, you are more trapped, because you begin to obtain things you don’t really need and go into debt.

Today, society is one truck away from having no food at your local supermarket, where the shelves will be empty in times of crisis, because you depend not upon God but upon those Safeways. But it’s the wrong “safe way” that you’re depending upon.

We don’t need a vaccine for Covid-19, because then there will only be a Covid-20. What we need is a Spiritualutionsm, a spiritual revolution, where more and more Americans and peoples of the world come to the Creator, as individuals, and begin to follow the will of God in their lives. And all they have to do is ask, and God will guide them.

The door of Noah’s Ark is being closed, and you better get in, before it’s too late.

Nibiru, Planet 7X, The Destroyer, Wormwood — The Adjudicator is Coming: Time for the Spiritualution!

The New Jerusalem is Coming: Fulfillment of the Blue Star Kachina Prophecy & the Book of Revelation