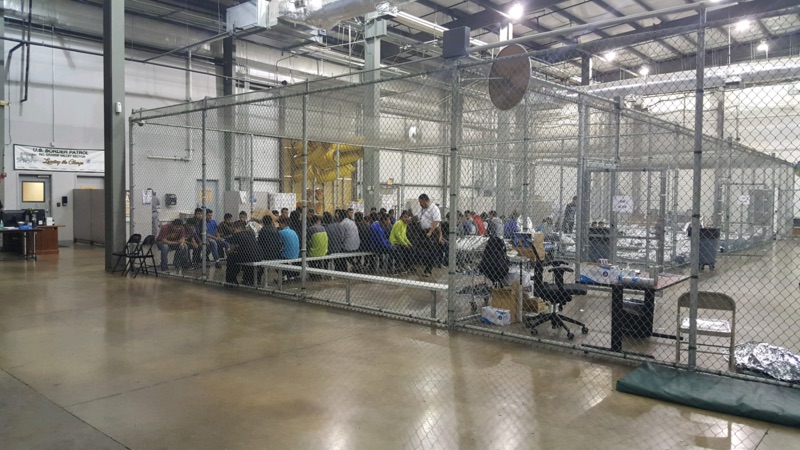 The Irish philosopher and statesmen Edmund Burke, around the time of our own Constitution, said “The only thing necessary for the triumph of evil is for good men to do nothing.” This very well may have been a truth that George Washington and other writers of our Constitution read, before they wrote our Constitution in 1776.

It does indeed take good men and women to speak out against tyranny and racism in order to curb it and hopefully stop it in its tracks. How did we get to this place where possibly half our country is crying out “send them back to where they belong”? — echoing the cries of the President of the United States, which at one time was the office and mandate that had the respect of all the peoples of our planet, and our country has the writing on the Statue of Liberty which says:

"Give me your tired, your poor, Your huddled masses yearning to breathe free, The wretched refuse of your teeming shore, Send these, the homeless, tempest-tost to me, I lift my lamp beside the golden door!"

When many immigrants came to America, their names were changed at Ellis Island for more American type names. The powers that be, within the worst of our government officials, also took the identity away from millions of Native Americans, the true citizens of the Americas.

It is unfortunate that our differences over slavery, in the 1860s, led to The Civil War. We are already fighting with each other in Portland and other American cities. Will America do the same thing that the people of Israel did 2,000 years ago, when they cried “Give us Barabbas” and they let Jesus be tortured and crucified?

Most people don’t want to try to change the world, or anything, because of reprisals from those who have more power than them, and they have read the history of outspoken voices for good and change who were misrepresented, whose characters were destroyed in the press, or they were outright assassinated—men and women like the Berrigan brothers who were priests; Father Oscar Romero, who was also a priest; Ken Saro Wiwa of Nigeria; and Steven Biko of South Africa, Benazir Bhutto of Palestine; Mahatma Gandhi of India; Martin Luther King, Jr.; Marie Colvin, American journalist, and many others. See the link below:

Little did I realize, when I became an activist at age 24, that it would lead to a life of grief and emotional pain caused by those in power within city, county, state, and even federal agencies, who were on the wrong side of the kingdom of God on Earth, because that is what it boils down to. But that’s a long story.

Because we live in a fallen and rebellious world, the commandments of God and the principles of God have been cast aside to the principles of self-assertion, greed, lack of morality, and the famous line that is the greatest lie ever spoken on the lips of human beings, “Do your own thing.” All humanity has to learn—like Moses tried to teach to the people of Israel thousands of years ago B.C.—that humanity has to pray, as individuals, to hear what God’s thing is for their lives.

Just like what happened in The Civil War, in our country, happens in civil wars in other countries between families, because some members of the family are closer to God than others. And others who are not close to God usually compromise with the evil within them, and the saying is on this planet, “Birds of a feather flock together.”

Usually people can temporarily walk with God, as long as they get what they want—a better living situation, a partner, something that will keep them saying “Amen” to their elders, until their elders say something to them they don’t like or don’t want to obey.

Throughout the history of the Church, apostates of all religions have left and started their own churches or joined churches of those religions that became different sects of those religions. They fight against each other and even kill each other in the name of God or Allah or Odin. The truth is, no true person of God would ever kill anybody, unless they were protecting their own families. But the Crusades were proof positive that religious perspectives sure do get blurred by fundamentalism and people who really do not know God at all. Thus this is the world we are living in—scary, to say the least.

We become enemies sometimes with our own families and even our own sons and daughters. This is what happened with Lucifer, who was the son of Michael, the Sovereign ruler and creator of the universe of Nebadon. He rebelled against his own father, and the laws of the Universal Father, all in the name of this self-assertion that I was talking about earlier. He said that his way to Paradise was easier, and you did not really have to follow the commandments or God’s laws of any kind, and to do your own thing. Have you heard that before?

People who do not want to really walk in the laws of God usually are cafeteria religionists, they pick and choose their own scriptures that serve them but overlook the ones that don’t. And they overlook, too conveniently, the addictions of others because they don’t want others to see the addictions in them. They even, on Facebook, compliment one another, even though the ones they are complimenting are drug addicts, alcoholics, sex offenders, and individuals who want no authority in their lives over them, in any way, or none in the spiritual realms.

This goes against the basic principle of submission to the appropriate spiritual elders of every religion on the planet and to the teachers of the indigenous for centuries. So today, the old teaching of the Lucifer Rebellion that says “you are all gods” is echoed by millions in quasi-religious movements. They are the new gurus of the Facebook pages. It’s the “I’m OK, you’re OK” philosophy, that again started 200,000 years ago when Lucifer came against the true eldership of the Universal Father.

The most sophisticated and iniquitous, or the self-asserters, usually control the less sophisticated. The older souls manipulate younger souls and often can keep them in blind delusion for years, and decades, and possibly a whole lifetime. The URANTIA Book has the teaching of evil, sin, and iniquity.

And at The University of Ascension Science and The Physics of Rebellion—(which was started by myself and Niánn Emerson Chase, a descendant of one of the greatest existentialist Christian teachers of our planet, Ralph Waldo Emerson)—we further teach the continuation of The URANTIA Book, called The Cosmic Family volumes, which get more in depth using the principles of theoretical physics to teach the discernment of a soul in various levels of error, sin, and iniquity, and how to recognize those in each category, and to help them if they are wanting to be helped.

Students learn that by getting out of those wrong thinking patterns of perceiving and doing wrong things, they can manifest in their lives their God-given destinies that the Universal Father designed for them before they were ever born on this planet or any other planet. As a matter of fact, I can honestly say that if you are reading this article, it’s because the Universal Father is reaching out to you to make the changes in your own life by praying to the Universal Father to help you to change and to guide you into the next spiritual consciousness of your destiny throughout time and space.

Because we are living in the times of transition, every wrong thought or action will have immediate consequences for the good or for the bad at this juncture on the planet. The tribulation spoken about in Revelation of the New Testament in the Bible is upon us humans. Our planet is about to come into “the first stage of light and life” (referred to in The URANTIA Book), and the New Millennium in Christian theology. It is not about being a Republican, or a Democrat, or a Libertarian. Eternity is about being a good and kind human being. It is not about a revolution, it’s about a Spiritualution, where each person needs to become perfect, as Jesus asked us to do 2,000 years ago.

Our leaders simply cannot say to people of color “Go back to where you came from.” I don’t believe we should have any borders. Call me an idealist, but nationalism is only the cause for the next war and somebody bigger than you taking over what they need from your country. If we would learn to share, as Jesus taught us 2,000 years ago, there would be no reason for borders. Somehow it would all work out if we really loved each other and did what it says right in the first chapter of Genesis: to be our brother’s and sister’s keeper.

We haven’t even come to the place of seeing ourselves as planetary citizens. It would be really a spectacular event if those little green men would land on this planet and say “Take me to your leader” and they would be taken to a world leader and the leader would say “Go back to where you came from.” Because we need to start seeing each other not with nationalistic eyes, or even planetary eyes (which would be a step in the right direction), but go even beyond that and see ourselves as cosmic citizens.

When I grew up in Pittsburgh, Pennsylvania in the Uptown area, there used to be street gang fights all the time with gangs from other parts of the city. It was ridiculous. And some people never grew out of that mentality of ethnocentricity. And I’m afraid that many of our leaders on this planet are still stuck “in the neighborhood.”

The song “Wake Up America” by TaliasVan & The Bright & Morning Star Band can be heard on Spotify and KVAN.FM online upon request.