Environmental and Social Conservator and Activist 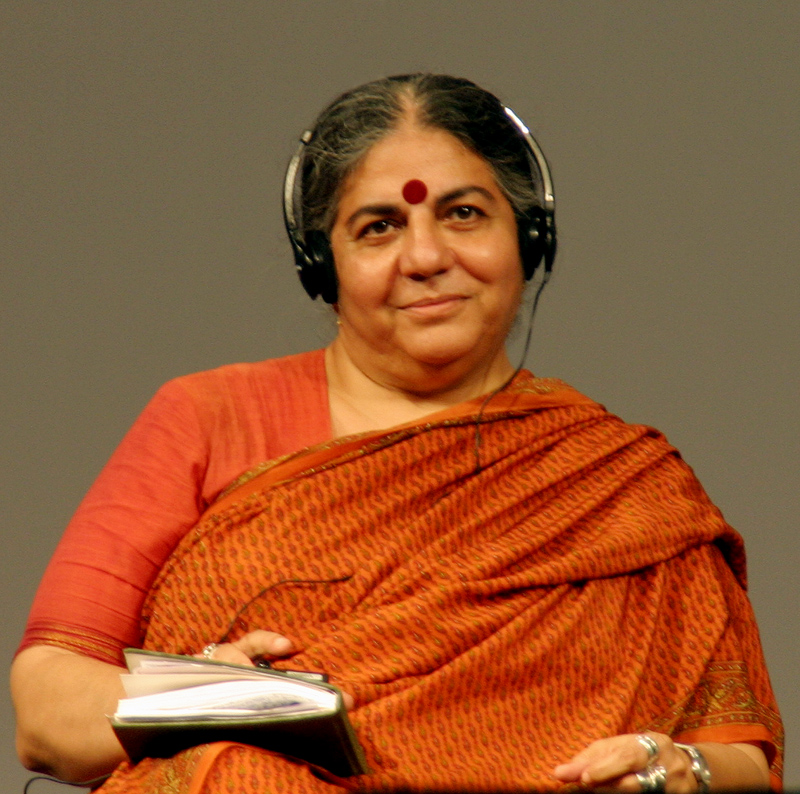 With economic globalization sweeping across the world, making the gap between the rich and the poor wider and deeper, increasing the vulnerability of both ecosystems and social systems to break-down and disintegrate, there is a need to build an international coalition of men and women to respond to globalization, and its impacts. The Research Foundation for Science, Technology, and Ecology, founded by Dr. Vandana Shiva in 1982, works on biodiversity conservation (the variety of earth’s plant and animal life), and protecting people’s rights from threats to their livelihoods and environment by centralized systems of monoculture in forestry, agriculture, and fisheries. Dr. Vandana Shiva is a physicist, ecologist, activist, editor, and author of many books. In India she has established Navdanya, a movement for biodiversity conservation and farmer’s rights. Her activist movement (Navdanya) places the farmer at the center of conservation and empowers him to take control over the political, ecological, and economic aspects of agriculture. Navdanya means nine seeds, and these represent India’s collective source of food security. In addition, Dr. Shiva has helped organize an organization called Diverse Women for Diversity , a global women’s movement, which seeks to herald a global campaign of women on biodiversity, cultural diversity, and food security. The organization, at a grassroot level, is aimed at overcoming people’s incapacity and hopelessness in the face of severe ecological, economic, and political breakdown, providing women with a common international platform to air their views.

Dr. Shiva’s foundation has been involved in a variety of issues related to the loss of genetic material and women’s role in the environment . It has coordinated movements against the efforts of multinational seed companies, notably Monsanto, to impose it’s genetically engineered seeds on Indian farmers. It has also run campaigns against patenting of traditional Indian herbs and plants. The foundation has helped farmers in different parts of India to grow crops, using their traditional seeds instead of hybrid seeds widely available under India’s agrarian revolution. The foundation has done extensive research on how globalization has affected the livelihood of farmers in different parts of India. In some parts it has been bad enough to drive the farmers to suicide after crop failure due to using hybrid seeds, and an excess of fertilizers and pesticides. Dr. Shiva’s activist campaign includes: (1) a global ban on a new genetic technology which aims to prevent farmers from saving seeds, (2) to convince delegates that Trade-Related Intellectual Property Right belong in the venue of the convention on Biological diversity, not the World Trade Organization, and (3) to reject the patenting of Basmati rice. Basmati rice originated in the Indian sub-continent and has been bred over centuries by farmers from India and Pakistan. However, the US company, RiceTec, is now claiming a patent number on a variety of Basmati directly bred from Indian Basmati. Such piracy will continue, say Dr. Shiva, unless indigenous innovation steps up to protect their donation to the world.

With genetic engineering violating the ecosystem boundaries, Dr. Shiva implemented the Navdanya program to fight the seed monopolies. She started the program as a political act so that farmers would have free seed in their hands. Using the free seed, the farmers would be able to resist the kind of control system that the corporations were trying to establish in India, and at the same time establish sustainable organic agriculture again. With corporate export agriculture expanding rapidly under the encouragement of policies introduced through the World Bank, and the World Trade Organization, Dr. Shiva is helping farmers counter this destructive intrusion through three practical actions: establishing living seed banks, training farmers in chemical free sustainable agricultural methods, and engaging in policy advocacy with the Indian Government to oppose legislation aimed at implementing various provisions harmful to the small farmers. The living seed banks exist now in six states, and they are maintained by farmers who identify themselves as the "seed keepers" for the community. The advocates of genetic engineering and chemical agriculture try to scare the farmers into believing that genetic and chemical agriculture is the only way we can feed the world’s population. Dr. Shiva has done exhaustive research on this subject and provides every farmer the truth regarding such false claims. Dr. Shiva tries to get to the farmers before the corporations do and she has been very successful in her activist campaign.

We the members of Global Community Communications Alliance take this time to recognize and salute Dr. Vandana Shiva for her activist movements regarding the environment, mother earth, and the well being of her native people and the world at large.