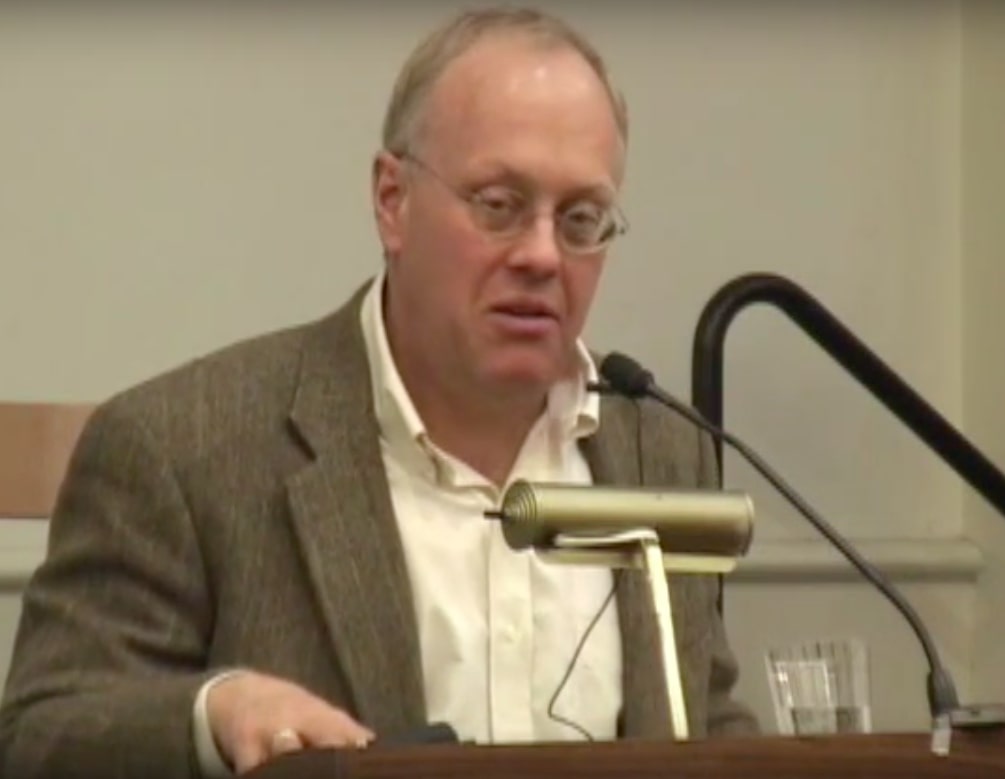 Going to many lengths to expose our world’s dishonest and imbalanced political, economical, and social structures, Chris Hedges is a peace activist, war correspondent, and writer. He is a man loyal to helping bring about change for a better world by working at removing the veil of blindness from many planetary citizens’ consciousness.

Chris Hedges was born September 18, 1956 in St. Johnsbury Vermont, graduating from Colgate University with a BA in English and receiving a Master of Divinity from Harvard. Chris’s father was a Presbyterian minister in Syracuse New York, a veteran of World War II, and a vocal supporter of the civil rights movement. “I have always sought to meet the moral and ethical standards my father set. He remains an invisible witness to every action I undertake.”

Hedges spent two decades as a foreign correspondent in Central America, Africa, the Middle East, and the Balkans—with seven of these years in the Middle East and six in Latin America. In addition to English, he speaks Arabic, French, Spanish, Latin, and Greek. During the first Gulf war he was taken prisoner by the Iraqi Republican Guard while covering the Shiite uprising in the southern Iraqi city of Basra. He was released after a week to the international Committee of the Red Cross.

He was in New York during the collapse of Building 7, after the plane hit. “I watched as a nation drank deep from that very dark elixir of American nationalism. . . the flip side of nationalism is always racism, it’s about self-exaltation and the denigration of the other.”

Hedges has written ten revolutionary books including: What Every Person Should Know About War (published in 2003), Losing Moses on the Freeway (published in 2005), and American Fascists (published in 2007). In 2002 He wrote the best seller, War Is a Force That Gives Us Meaning. This book is an inside examination of the effects of war for societies and individuals.

Also in 2002, working for the New York Times in Paris, Chris won a Pulitzer Prize for the paper’s coverage of global terrorism and won a Global Award for Human Rights Journalism from Amnesty International. In 2003 Hedges was asked to give the commencement address at Rockford Collage. Within his speech he said, “This is a war of liberation in Iraq, but it is a war of liberation by Iraqis from American occupation.” As Chris spoke, several hundred people began booing. The microphone was cut twice, and he was escorted off campus by security officials before the awarding of diplomas. After this the New York Times issued a formal reprimand which required that Chris Hedges cease speaking about the war. Chris chose to remain a warrior of light, sticking to his integrity, and was fired from his unwillingness to comply.

From War Is a Force That Gives Us Meaning: “In the beginning war looks and feels like love. But unlike love it gives nothing in return but an ever-deepening dependence, like all narcotics, on the road to self-destruction. It does not affirm but places upon us greater and greater demands. It destroys the outside world until it is hard to live outside war’s grip. It takes a higher and higher dose to achieve any thrill. Finally, one ingests war only to remain numb.”

Chris writes, “I believe that the truth is the only force that will set us free. I have hope, not in the tangible or in what I can personally accomplish, but the faith that battling evil, cruelty, and injustice allows us to retain our identity, a sense of meaning, and ultimately our freedom. Perhaps in our lifetimes we will not succeed. Perhaps things will only get worse. But this does not invalidate our efforts. Rebellion—which is different from revolution because it is perpetual alienation from power rather than the replacement of one power system with another—should be our natural state and faith.”

We in Global Community Communications Alliance also agree with rebelling against a system that does not work for the common highest good of all and building a system based upon divine-administration principles. We honor Chris Hedges for being one of the deep-thinking and courageous people who are contributing to the challenging fight for justice for all people, planet-wide ethical governing, and worldwide peace.