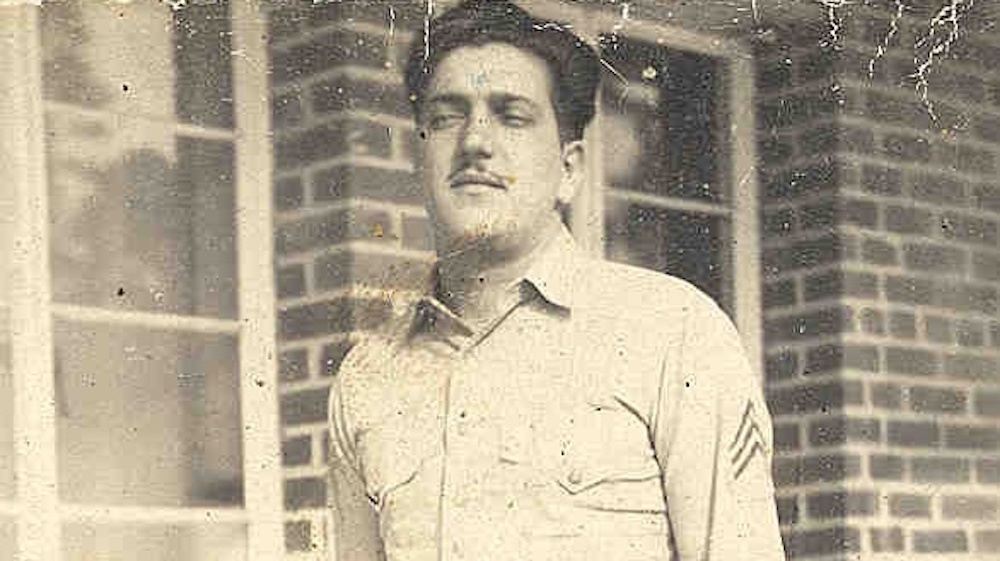 My father passed on from this planet at approximately 7 A.M. Eastern Standard Time on Tuesday, Feb. 24, 1998, at Mercy Hospital in Pittsburgh, Pennsylvania. He was the son of immigrants from Italy. My grandparents were farmers who had their land taken from them when Mussolini took power in Italy. Their names were Joseppi DellErba, which means "of the grass" or "of the earth" and Lena Sesto. They came to the United States with the hopes of a new future. My father was born in 1921. It was a new era for my grandparents here in America, and they became part of a new order, with all of the hopes that immigrants have for this country.

My paternal grandfather went to work in Jones & Laughlin steel mill in which he lost one of his legs. My father, who everyone knew as "Tony," also worked in the open hearth and had one of the hardest jobs in the mill as a steel pourer and a stopper setter, working closest to the boiling hot steel in the ladles. He would come home with burns all over his body even though he wore an asbestos suit to protect him. He chose this work to support his family, my mother, my sister, and me.

My maternal grandfather was a veteran of World War I and worked in Crucible and Bethlehem Steel, as well as many of my uncles, cousins, and other family and friends. My father's death, in his heart, actually began in his early fifties when Jones & Laughlin closed down the mills and my father and thousands of other men—many of them who served in World War I, World War II, the Korean conflict and Vietnam—lost their jobs or most or some of their retirement benefits as well as most or all of their medical benefits. United States Steel also closed down their plants in Pittsburgh. I decided to become an activist, from that point on, in my late teens.

I recently mentioned this American tragedy and the plight of the farmers and the auto workers in an interview with NBC Dateline stating, "What kind of system would allow this to happen to its loyal, patriotic workmen and citizens as well as to their families?" We shall see if they include it when it airs this evening. (Update: NBC Dateline did not include the previous statement nor did they include my statements about the abuse to the United Farm Workers).

My father had been in a coma since right after Christmas. I am lengthy in this memorial to him for I feel his passing is timely.

He was a patriot and a soldier during the Second World War; he joined the Marines in the beginning of it to serve his country. He became a sergeant who fought most of the war in the islands of the Pacific being involved in first landings in Guam, Saipan, The Marshall Islands, Iwo Jima, and Okinawa in which he was involved in Hacksaw Ridge that a movie recently in 2016 was made about. If my memory serves me correctly, his division was the 1st Marine Division, in which they would later in 2012 make a TV series about.

He never liked to talk about the war, but I knew he was decorated from my uncle and the medals that I saw on his uniform in his closet. My father instilled in me loyalty for what I believed in and to my country. And in 1964, three days after graduation from high school, I tried to join the Marines to serve my country in Vietnam. I was declined because of a physical limitation I was unaware of. This is my heritage, and I am proud of it.

My father, mother, and sister did not understand my work or my name change to Gabriel. My father taught me when I was very young if what I believed in wasn't worth fighting for or even dying for, it's also not worth believing in. He did not accept the Fifth Epochal Revelation and Continuing. He and all my family are Catholics. He respected me, and he told me once—when he came to Sedona to visit his three grandchildren here—that he was happy that I was involved in work that made so many other people happy. He met many of the community members then.

He was a living example and reminded me of what it means to be a servant and giver to others, even if I had other lives before. My father had one of the biggest hearts in the world and during times when my uncles or cousins and their families had no money and he was working during the boom days at the mill, he supplied many of those families with money, food and clothing as well as Christmas gifts if they had none. Again, this is my heritage; I am proud of it.

Because I have been an activist in social, environmental, and spiritual concerns, much has come against me from great powers, as well as people who do not understand what I am all about or trying to accomplish for their sakes and the sake of the world at large. Although I have been a warrior in many lifetimes, it was my father, Anthony Victor Delevin DellErba, who God saw fit to bring me through to this planet again and raised me to become again, in this life, a soul of courage. And although I have not seen first landings against the enemy like my father has, I have seen many first landings against evil, sin, and iniquity in high and small places and will continue to do so as long as God keeps me on this planet.

I know I shall see you again, Father, in the mansion worlds of Satania. Even though my soul is older than yours, thank you for raising me with courage and conviction and reminding me, your teacher-son, that we have to continually choose to do the right thing, for that's what free will is—it's a moment to moment decision. You were a living example by being steadfast and doing what you believed to be true to yourself, and which I will try to live up to with the work that Jesus Christ Michael has called me to do. I miss you terribly and miss being around your strong manly presence.

Your loving son,
Gabriel of Urantia